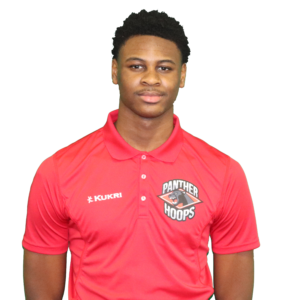 Denardo is a resident of Freeport, Grand Bahama. The oldest of 4 boys, he started playing street basketball in the unkept courts of his local community. He attended Jack Hayward school and tried to formally pursue his natural talent for basketball. Denardo realised he was quick, athletic and loved the competitiveness of the sport. Influenced by his grandmother, he made a school change to Grand Bahama Academy to pursue his passion. He played in an influential game against the top seeded team and was offered a scholarship to play at the prestigious Tabernacle School. Here Denardo’s pace and athletic advantage shone through. He excelled at Track and Field, his Personal Best being 49.60 seconds for the 400 metres and 200 meters was 22.93 seconds. He was selected to play for the Bahamas U17 National team and his talent was showcased at International tournaments. Following in the successful footsteps of other Bahamian players, he was scouted by Panther Hoops International Basketball Academy and made the decision to move to British Columbia. Despite Covid-19 restrictions, Denardo has made the most of the season, playing and training with a collection of top-level international athletes to compete at the highest level possible. At 6ft 4’ tall he is blessed to have a wingspan of 6ft 10’ enabling him to rise high. Denardo is looking to continue to develop his game and repay his grandmothers faith in him.