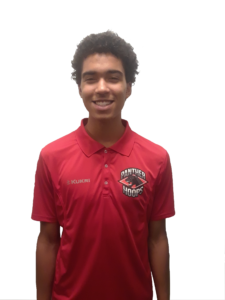 Caleb was born and grew up in Prince George, BC. Supported by his parents he began playing basketball at the age of 12, a path made easier as Caleb obviously inherited his father’s athleticism, his father was a high-level soccer player from Nigeria.

His love for the game grew into his teenage years, Caleb took every opportunity to be on the court riding across the City on his bicycle before and after school, to practice at the leisure centre. Under the watchful eye of Coach Scott Walton, he played at Prince George Secondary school and dominated as the point guard, reaching the Provincials, Caleb chalked up an impressive 40 points in one game. Caleb won Athlete of the Year consecutively in Grade 9 and 10.

Coach Walton ensured Caleb had exposure to top level programs across the Province and they attended tournaments and camps including BC Futures Camp and BC Centre for Performance. In the summer of 2019 Caleb travelled and practiced with Panther Hoops, he knew he wanted to return full time. In the Spring of 2020 Caleb was invited to the Panther Hoops International Basketball Academy as a Prep player. He moved in with his homestay family and is now developing his on-court skillset with the Panthers. Caleb is a detailed and precise player with a solid foundation, as his experience grows so will his on court prowess.

Off the court, Caleb is doing extremely well academically and is set to be a high achieving student. He was a member of his High School Advisory Council and has assisted as a basketball junior coach. Caleb can play the trombone, and in his spare time loves to do puzzles and watch basketball. His favourite team is the Toronto Raptors.