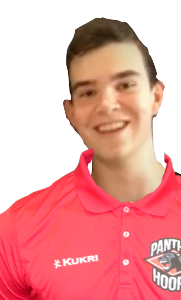 Alex was born and raised in Kamloops, British Columbia.  His mother encouraged him to play basketball at the age of 9, he was tall and excelled at school athletics jumping events. He began to take the sport more seriously many years later at the age of 15 at Valley View Secondary School and Pro Hop Basketball Club.

Alex is an avid sports fan and follows the Portland Trailblazers, his favourite NBA players are Nikola Jokic and Damian Lillard. He also enjoys NFL particularly watching the Buccaneers, Bills, Chargers and Giants, with his most admired player being Steve Christie.

He was referred to Panther Hoops International Basketball Academy in the summer of 2020. Following some short visits, he made the transition to join the Prep program.

At 6ft 10’ and 220Llbs Alex is impressive. He states his goal is play at the highest level of play for his ability and obtain a professional contract in doing so. Alex describes his strengths as having a competitive mobility and quickness for his size. He believes he has more to come athletically and looks to develop his untapped jumping ability from his early years. Alex likes to pop out and shoot 3’s and is developing his touch under the basket.